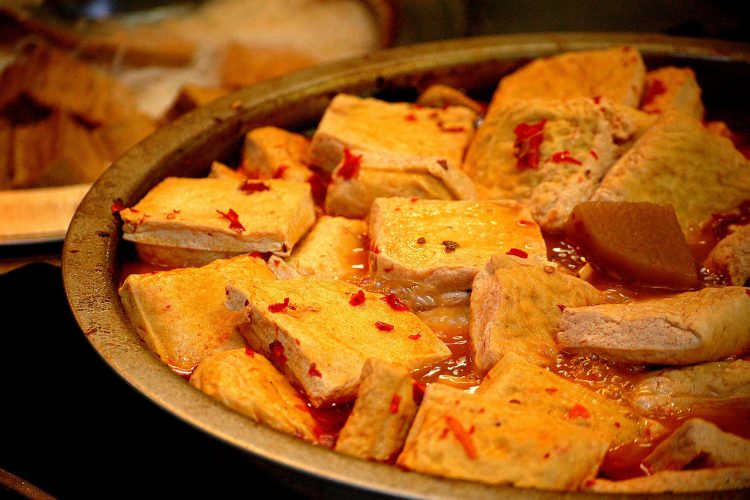 I remember there was one Chinese New Year when I was still in the UK, I invited my housemate to have a celebration with me at home. I selected some dishes from the local Chinese takeaway menu and cooked a big feast. I did not get a lot of appreciations, but instead, looks of disapproval when they tasted the Mapo Tofu (spicy Szechuan tofu). They said, this is not Tofu, it is waaaaay too soft. I got irritated and said don’t you tell me what Tofu is! Do you really know Tofu?

As an Asian I am proud to have Tofu in my life, and I cannot live without soya sauce. As well as taste, Soy is also popular because it is nutritious. It works as a meat extender in the process of burger manufacturing, to replace some percentage of meat with plant protein and dietary fibre. Soy is also very versatile. Its products are in many shapes and forms, including Tofu, soya milk, and a popular vegan favourite, vegan mozzarella cheese.

The history of Tofu stems from a tale, in which alchemists in ancient times accidentally mixed gypsum salt (calcium sulphate) with soya milk during transmutation. The mixture coagulated in seconds and the first Tofu was made. Calcium sulphate is still in use in modern time Tofu manufacturing to coagulate protein and oil in soya milk. Other coagulants include acids (e.g glucono delta-lactone) and enzymes (e.g Papain).

Firm Tofu is hard in texture and widely available in local supermarkets which has led to it becoming the de-facto form of Tofu the average consumers is acquainted with. However, it is not the only form available and there are many other variations in existence. Silken Tofu, as described by its name, is smooth, silky and soft. Honeycomb Tofu is made by freezing firm Tofu, in which water crystallises and then stretching it into a porous spongy structure. Another variation, Tofu puff is created by deep-frying Tofu.

Aside from Tofu, there are many soy products in Asian culture. Soya milk is the juice extracted from soaked soy beans. The soya milk is then boiled to denature toxins, which cause gastric distress. Tofu’s cousin, Tofu skin or yuba is made by drying the film of protein on top of the heated soya milk.

Soya sauce is prepared by a process of fermentation in brine using koji mould (A. oryzae and A. flavus) or other microbes in other regions, filtering and refining. Miso of Japanese miso soup is also from the fermentation of soy bean by a similar process, but with minor variations in ingredients. Salt is used in place of brine and wheat is used instead of rice for Koji cultures.

As well as being a persistent feature in the vegan diet, soy also plays an important role in future food. It is a source of plant-based protein which provides a very nice meaty mouthfeel. It is already being used in Quorn, a popular brand of meat substitute. Impossible burger also uses it together with haem protein for resembling the taste and chewiness of a beef burger. Most recently, textured soy protein (TSP) has been studied as a biomaterial for scaffolds in cell-based meat, and the progress has been reported in the 4th International conference for cultured meat.