Marmite The bread that saves animals 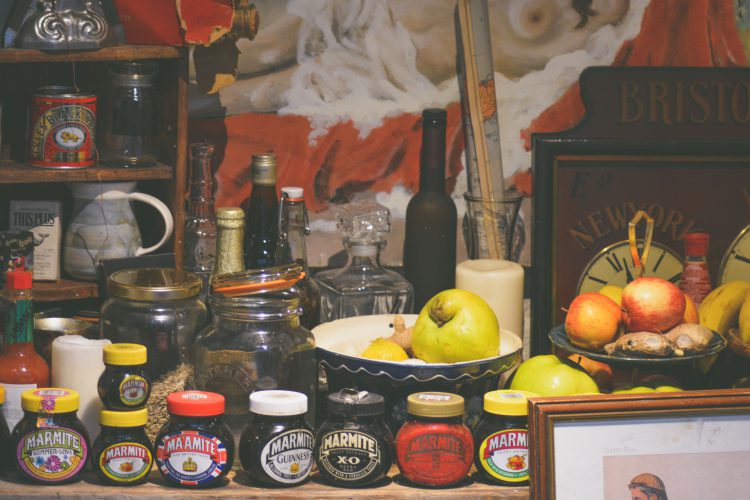 Seaweeds to most people are just the thing we wrap around sushi, with a fishy taste and an almost paper-like mouthfeel. When talking about seaweeds most people would categories them as Asian taste. However, looking back through history, seaweeds do not only belong to Asian cuisine. There is also dulse from the Pacific and Atlantic Ocean. It is dried flakes of red seaweed, and has been consumed in Ireland and Iceland since 1400 years ago. While most of the fresh seaweed gives an oceanic umami, because of the MSG in it, pan-fried dulse gives a smoky meaty taste resembling bacon.

Some might regard seaweeds as a trendy superfood, since they are rich in vitamins, minerals, protein and particularly iodine. Providing iodine in particular has made them popular in vegetarian diets. They can be consumed directly or used in food manufacturing. They help thickening, suspending, emulsifying, stabilizing and gel formation in ice cream, jellies, salad dressing and persevered meat.

Alginate is the fibre extracted from certain seaweeds or produced by some bacteria. The cost of extracting it from bacteria is too high and therefore most of them are from three species of brown alga. Cultured-meat scientists have been working on the best biomaterial to grow tissue on, which means non-toxic, edible and versatile in different forms.

Alginate has been used in tissue engineering in medical transplants. The advantage is it is permeable to nutrients for cell growth, but filters bacteria and contaminants when cells are encapsulated. In medical transplants, alginate serves as an artificial matrix for cells to adhere and grow. The cells eventually synthesise their natural extracellular matrix (ECM), and give rise to new tissue. Some alginate scaffolds would slowly degrade during the process.

Alginate exists in different forms. It could be a slurry gel in food industry or hydrogel scaffolds in tissue engineering as a 3D matrix scaffold. It can also incorporate with other materials, for example, cellulose or calcium salt. Blending alginate with cellulose decreases the brittleness of alginate fibres, while calcium ions increase the strength of the alginate fibres in a controlled manner.

Being able to be shaped into porous sponge made alginate a very useful biomaterial in tissue engineering and cultured meat. These sponges are made by freeze-drying with calcium. Culturing blood vessel cells and muscle cells together with connective tissues on porous biomaterials results in vascularisation (the extension of blood vessels) into the porous framework. Vascularisation allows nutrient supply to the core of the 3D tissue.

One of the biggest advantages of the alginate in tissue engineering is being stretchable. Cells attach and grow on microcarrier beads in bioreactors. Studies have shown that the stretching property of these beads helps differentiations of tissues. This property is even more critical when muscle cells are grown, because it keeps the muscle fibres from detaching when they spontaneously contract.

There are many more biomaterials choices available, but the development of alginate 3D scaffold is rather advanced. With some modifications from medical scaffolds, alginate has great potential to play a part in cultured meat research.

Fun fact: ...is yeast vegan? 100%. Yeast is a single-celled organism. It is even a more simpler life form than a vegetable and does not look more complicated than a sphere. It does not fit into the definition of animal kingdom. If your concern is about animal right, yeast does not have a sensory system (of course!) so even if you take a it would not feel any pain. If you are eating a vegan burger meal, yeast is basically everywhere including the bread, the beer and the natural flavouring in the vegan patty.